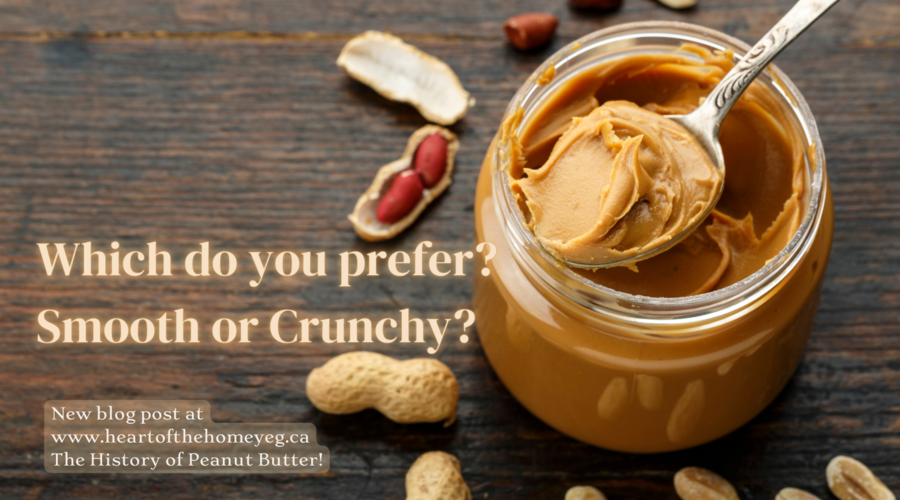 Which do you prefer - Smooth or Crunchy?

Peanut butter has been a staple of the North American diet since the late 19th century, and has undergone developments and improvements through the years to become the spread that embodies the classic lunch sandwich. Even though peanuts are referred to as nuts, they are actually legumes and related to beans, lentils and peas. This is why someone with a peanut allergy may not have an allergy to other nuts, and often folks with a tree nut allergy can eat peanuts.

The origins of peanut "butter" can be traced back to the Aztecs and Incan civilizations, where they reference grinding roasted peanuts to a paste. The peanut itself originated in either Peru or Brazil, migrating from one place to the other. Peanut shaped pottery has been found in these areas that date back 3500 years! Peanuts were used by the Peruvian Incas as sacrifices. They also prepared and packaged them for their deceased to assist in the afterlife, as peanuts have been found preserved with Incan mummies. Central Brazil saw peanuts ground and blended in with maize to make drinks. Eventually, peanut culivation spread in South America as far north as Mexico.

When the Spanish conquistadors arrived in Brazil, they discovered they loved peanuts and took them back home to Spain with them. From there, peanuts spread out on trade routes to Asia and Africa. With the development of the slave trade from Africa to North America, peanuts travelled with enslaved African people to America in the 1700s. Peanuts developed into a commercial crop by the early 1800s, mainly for feeding livestock and slaves/poor people, and also used for oil and as a cocoa substitute. With the American Civil War, Union soldiers found they enjoyed peanuts and took them back to the northern states when they returned home. Production increased, methods of cultivating and harvesting peanuts improved, and demand continued to grow into the 1900s.

Peanut butter itself developed in the US, starting with Rose Davis grinding peanuts and spreading the paste on bread. Her son had seen Cuban women doing this, and he brought the idea home to his Mom. Following that, the concept of peanut paste grew and improved with various folks bringing improvments to the table!

Dr. George Washington Carver, a professor, scientist and horticultural specialist, career was focused on five-decades long research projects based around educating Southern farmers to nurture their land and produce crops for their families to consume and sell. With research into and separating the fats, oils, gums, resins and sugars of peanuts, Carver was able to find over 300 uses for them. One of those was a recipe for peanut paste, but not actual peanut butter.

Marcellus Gilmore Edson - a Canadian pharmacist and chemist - took peanut paste to the next level, creating the first patented peanut butter. With roasting peanuts and then milling them until they came to a fluid state, and mixing it with sugar to harden it. The resulting consistency was described as similar to lard or butter. Edson created this food product specifically for folks who could hardly chew food, which was a common state in the 1880s.

Breakfast cereal man Dr. John Harvey Kellogg entered the world of nutty spread by patenting a streamlined process for producing peanut butter in 1895. This brought peanut butter status as a nutrious snack for the health conscious elite of American society! It was served as a protein source in the wealthiest hospitals of the time.


1922 saw Joseph Rosenfeld creating peanut butter that did not separate, which eventually lead to his own product brand Skippy Peanut Butter!

Peanut butter serves many roles in meal planner these days, still providing quick after school snacks for kids all the way to being a protein alternative for vegan diets. There is a wide variety of mixes ready made for enjoyment, including - of course - jelly for the classic PB&J, plus honey, chocolate and even cookie pieces. Many natural food companies provide a gluten-free pure peanut paste, and if you are so inclined you can even make your own! Today is a great day to enjoy some peanut butter on your favourite bread or cracker, or bake up a batch of peanut butter cookies - YUM!