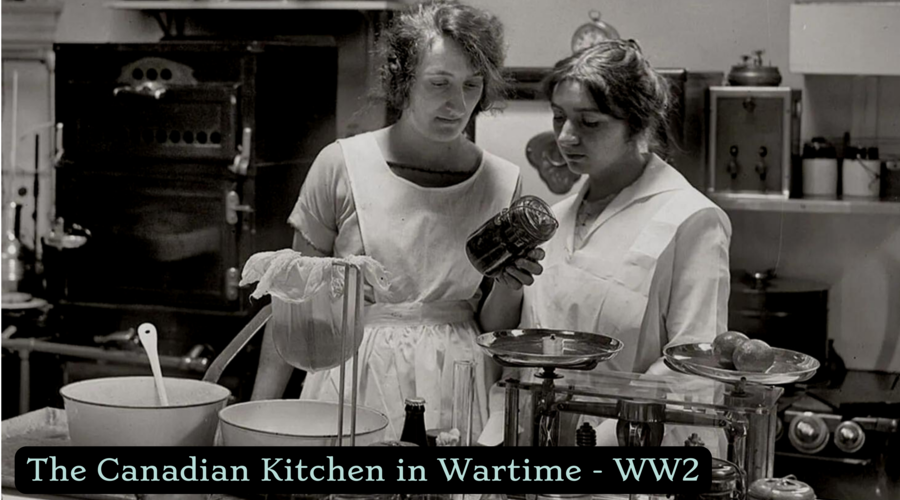 The Canadian Kitchen in Wartime - WW2

When we think of wartime and cooking, food and kitchens, ration books come to front of mind! Recipe books were created that catered specifically to baking with wartime rations, folks focused on using what was available and what they could find for viable alternatives.

When Canada went to war, the war effort itself affected supply and demand across many products. Production of rubber, metals and eventually foodstuffs were redirected to the fighters overseas. Canadian exports were greatly impacted as our usual importers were under duress and unable to function commerically.

Due to the drastic drop in Canadian exports, and due to the expansion of foods needed in Britian, Canadians were asked to adjust their purchasing habits to accomodate these changes. The apple export market collapsed, leaving our farmers with massive surpluses, and also leading to the Department of Agriculture running ads promoting serving apples daily. With focusing on recipes using apples, Canadian were able to keep our farmers going with using up their surpluses. Lobster was another surplus that Canadians stepped up to include into their diets regularly.

Canadian magazines began a drive focusing on creative recipes that took into account the rations on sugar, butter, tea, coffee and meat. In 1941, food columnist Mary Moore put a callout to the readers of the Windsor Star for a new feature she was developing "Best Wartime Recipes". Her requirements were simple: be flavourful, economical and to paraphrase Moore, hoarded against those lean days. Intresting side note for Moore; she began her career in the late 1920s writing for the Edmonton Journal. She continued writing for a successful 50 years, including syndication across Canadian newspapers, until her death in 1978. Following is a recipe from Moore's wartime weekly column that ran for 1941 to 1945.

"DEAR MADAM: I call the enclosed a 'Double Victory' Recipe as it not only releases eggs and dairy products for Britain, but uses the windfall apples - a surplus of which we have at the present time."

One quart quite thick cornmeal mush. Just before removing from the fire add 1 dissolved oxo cube and 1/4 teaspoon salt, 1/2 cup finely chopped cooked leftover meat of any kind. Mix well and pour into mould and let stand to chill overnight to make it at its best. Slice and fry in hot drippign or in deep fat, to a golden brown.

Around 1941, the Canadian Federal Government recognized that a large percentage of Canadian citizens were not receiving the proper vitamins and nutrients that they should, and a large scale effort was put into creating a national nutition program that educated children in schools and advertising in magazines promoting the program. We see this program to this day, with the recommendations made for updated diet information and food nutition best practices. Another way the Government stepped in was to enact a cap on pricing for most food stuffs so that Canadian households would all be able to shop for food. These measures ensured that most Canadians were able to put food on their table, even if it was very limited for what could be served.

Remembrance Day is a day of remembering the sacrifices of those who fought for the Canada and Britian Militaries, Airforces and Navies in World War 2, and also for remembering what we here back home in Canada did to ration, adjust and show pride in our country. Let us know if you find a wartime recipe and try it out, we'd love to hear from you!